The below charts provide a snapshot of our LowDrift FSR ink technology. At present there are several families of LowDrift FSR ink. We’re highlighting those that exhibit excellent drift characteristics at low pressures, such as those likely to be observed on a SmartShelf.

The first chart relates the logarithmic drift rate to pressure for the selected LowDrift FSR inks as well as our most mature FSR inks, collectively identified as Standard FSR: 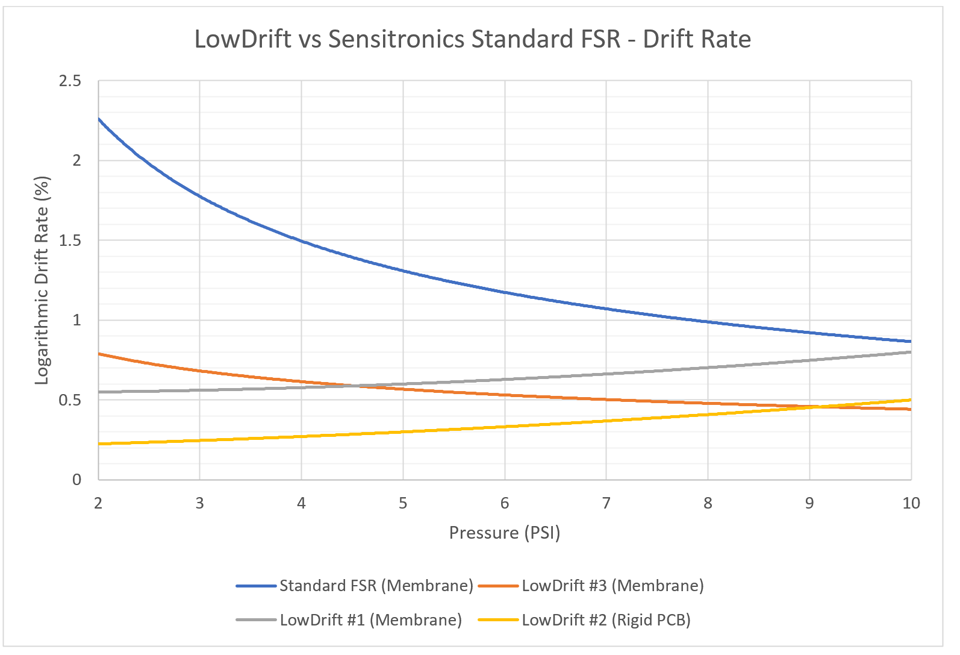 It should be noted that there are two variations of FSR assembly represented here: The LowDrift #2 print is assembled over etched copper conductors on a rigid FR4 PCB while the others are assembled over screen-printed silver conductors on PET. It has been observed that drift rates are generally somewhat lower with etched copper than with screen-printed silver. We are presently testing our LowDrift FSR inks with other conductor types as well as various thicknesses of conductor to determine the optimum combinations for both flexible and rigid sensor assemblies.

For a given period of time, the total drift can be estimated using the following formula, where driftlog is the logarithmic drift rate and t is the duration in seconds:

The next chart plots this total drift over 48 hours for each of the selected LowDrift FSR inks and Standard FSR. It can be seen that under a constant pressure of 2 PSI, Standard FSR drifts almost 12%. LowDrift #2 drifts only about 1.2%, or 90% less than Standard FSR. 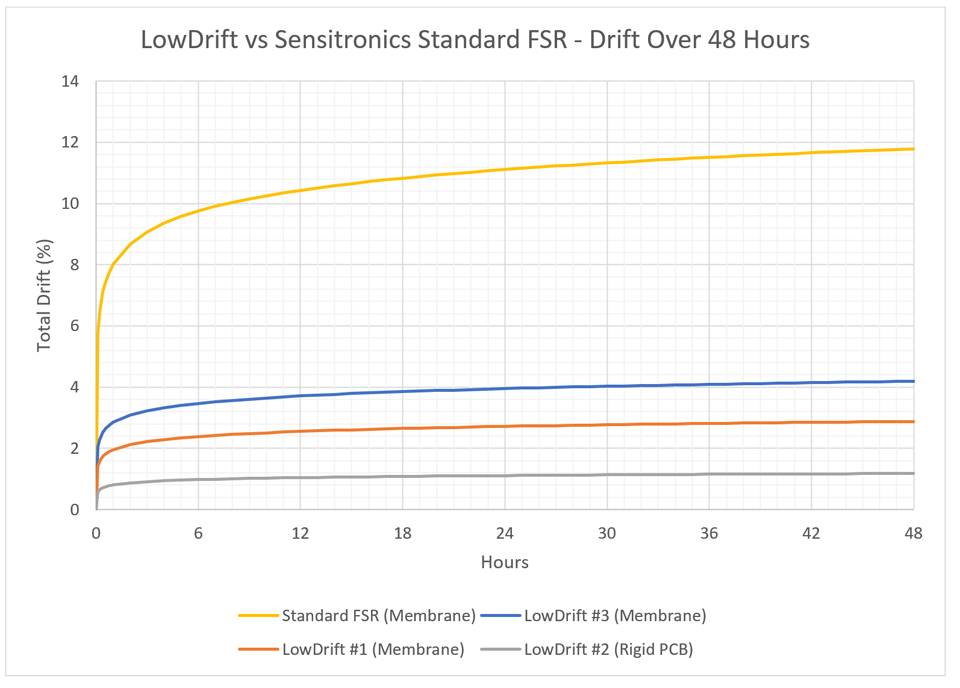 Note that these drift percentages describe a change in the conductance, not the resistance, of the sensor. FSR characteristics are commonly described in terms of resistance, however the resistance of an FSR has a logarithmic relationship with the applied force. This logarithmic relationship is one of several reasons why circuits incorporating FSRs, and especially those used for collecting data from FSR matrixes, employ transimpedance amplifiers to instead measure the current passing through the FSR, and hence the FSR’s conductance. Consequently, drift is also observed as a change in conductance. The conductance of an FSR generally has a much more linear relationship with applied force.

FSRs come in a variety of types, chiefly ShuntMode, Hybrid, and ThruMode. ShuntMode and Hybrid parts are generally the most cost-effective and the easiest to integrate, owing to construction that requires only a single circuit layer. The graphs above were generated using data gathered from these types of FSRs. ThruMode, which has two opposing circuit layers, tends to require higher quantities of conductive inks but is particularly well suited to high-density matrices (sensors can be as small as the intersection of two circuit traces). In our testing so far, ThruMode parts benefited less from LowDrift inks, showing improvements of approximately 50% (total drift over time) versus 75%-90% for their ShuntMode and Hybrid counterparts. Given these factors, we would suggest evaluating ShuntMode and Hybrid FSRs first unless your project requires especially high sensor densities.

Pictured above: Evaluation kits will soon be available for LowDrift FSR. These will include a 30x30cm FSR array with 900 sensing points, USB interface, and software for Microsoft Windows. For pricing and availability, email info@sensitronics.com.