Sensitronics' MatrixArray products are comprised of a multitude of force sensing resistor elements arranged in a grid.

To help you get started, here's a basic example demonstrating how to connect and read one of our 16x10 MatrixArrays, using an Arduino and some commonly available parts.

In Part 4, we observed that force inputs on the MatrixArray were detected in the correct location. Readings were proportional to force, and came reasonably close to spanning full scale ADC range. Analog performance looks satisfactory, so let's focus on speed.

We previously observed that a full scan cycle took about 57msec to complete (17Hz update rate), which is too slow for most projects, especially when measuring user touch inputs.

You may have already spotted some (glaring) innefficiency in the initial Arduino code example. Referring again to the scope view at right, let's look some key areas where we can probably make some major speed improvements. 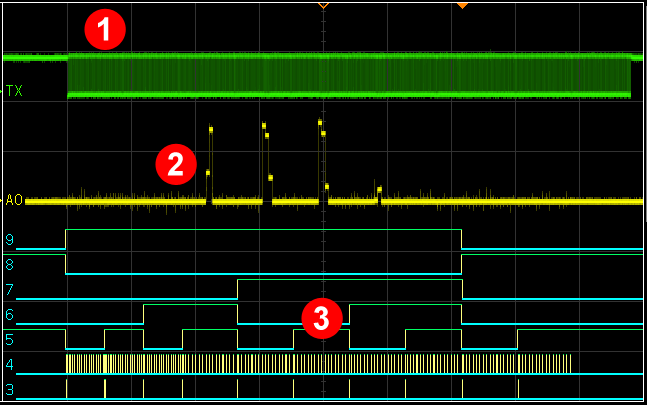 Looking at the TX pin, we can see the primary bottleneck of this system. Even if the hardware scanned faster, we'd still have to wait for serial transfers to complete before we could proceed with the next scan.

In the initial Arduino code example, we sent 3 bytes per reading, plus line endings, to keep consistent / readable text spacing in the terminal window.

If we reduce each reading to single byte and remove line breaks, we can instantly making Serial communication over 3x faster. Of course this will make a mess of the terminal window, so we'll create our own receiving app in Part 8.


We also notice long strings of zeros, so we'll apply simple compression, sending consecutive zero values as a single zero + count. For example, given a string of 100 zeros in a row, we will send "0", then "100" - 2 bytes instead of 100.